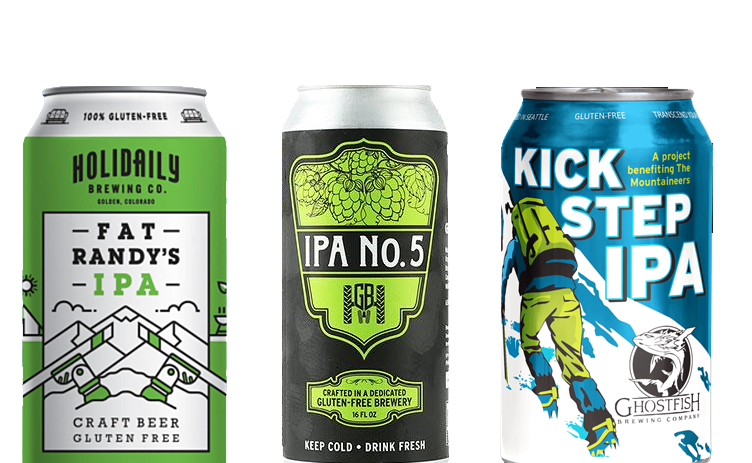 Gluten-free beer and gluten-reduced beer are not the same thing. One is safe for those with celiac disease (gluten-free beer) and the other one is NOT. And now you can find your favorite gluten-free beers all over the world in one amazing app.

What beers are gluten-free and where can I find them?

First, a joke. What’s the difference between Bud Light and making love in a kayak? They’re both f***ing close to water.

Ok...so I'm guessing you are here because you are looking for three things: 1) the unfiltered truth about gluten-free and gluten-removed beer and the vital difference between them; 2) what beers are gluten-free; and 3) where exactly you can find gluten-free beer.

I'll start with my history of beer. Bear with me. Or beer with me. When I was a kid, my dad drank Black Label beer out of a can (too often as it turned out...RIP dad). He very occasionally would offer me a sip and while I had no idea what "alcohol" was at this age, I thought it was cool that I was drinking "dad's drink".

"A man who lies about beer makes enemies."Stephen King

I also remember my very first own beer at a party in (if my kids are reading this...STOP HERE) seventh grade. It was a 7 oz. bottle of Miller and Bill Reeves gave it to me.

Fast forward to my college years and beer became a "how much can we get for the least amount of money humanly possible" kind of thing. Taste did not matter.

But then as I got older (I was going to say "matured" but who am I kidding?), I began to develop an appreciation for real beer. The 90 Minute IPA from Dogfish, the interesting varieties from Magic Hat, the care put in by a local brewery. Early in my years, I drank beer. Later in my years, I enjoyed beer. Big difference.

Then celiac hit. BAM! No more beer. I was crushed. I was devastated. I was crestfallen. You get the point. But wait...there is a gluten-free beer on the market called Red Bridge. YAY! I can drink beer after all. One taste and BLAH! No more beer.

But then something good happened. Other companies began brewing gluten-free beer that actually tasted delish and were completely safe for celiacs. Life was whole again.

"In a study, scientists report that drinking beer can be good for the liver. I’m sorry, did I say ‘scientists’? I meant Irish people."Tina Fey

End of story, right? I wish.

Other companies jumped in and decided to make "gluten-removed" beer. Just the name of it pi$$e$ me off. And confusion reigned, which sometimes is the norm in the celiac world.

So what is the difference between gluten-free beer and gluten-removed beer?

It basically comes down to profit over people. Gluten-free beer is exactly what it sounds like. It’s beer made with zero gluten ingredients and in a dedicated gluten free facility. Completely celiac safe. Gluten-removed beer, on the other hand, uses a proprietary process where they use gluten containing grains, usually barley, when they brew the beer. And then they add an enzyme, which theoretically removes enough of the gluten so the final product is below 20 parts per million. The problem is it’s not scientifically valid, and has been proven over and over again not to work on a consistent basis, which is why they are not allowed to call themselves gluten-free (in most countries.) And there have been multiple recalls of gluten-removed beer over the years because of...wait for it...too much gluten. Yep.

"24 hours in a day, 24 beers in a case. Coincidence?"Stephen Wright

Which beers are gluten-removed and should be avoided? Good question. The two biggies that own the market are Omission and Daura and these are the ones that you'll find in the gluten-free section in grocery/liquor stores and under gluten-free beers on restaurant menus. Like I said it pi$$e$ me off. There are a handful of other companies that make gluten-reduced beer. Just be real careful to check all labels.

Good question. The two earliest adopters were Red Bridge and Bards. I appreciate these two opening the doors to the world of gluten-free beer, but if we can be honest, they both taste pretty bad.

Here are my favorite gluten-free beers, in no specific order:

"Without question, the greatest invention in the history of mankind is beer. Oh, I grant you that the wheel was also a fine invention, but the wheel does not go nearly as well with pizza."Dave Barry

And here are a few others that I have not tried yet:

I'm sure I am missing a few from this list. Again, when buying GF beer, BE SURE TO CHECK THE LABELS AND MAKE SURE IT IS 100% GLUTEN FREE. 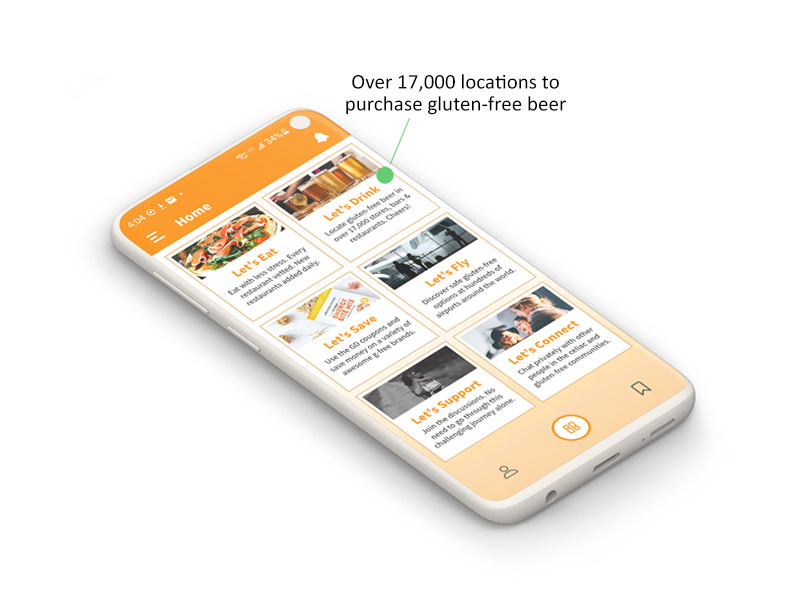 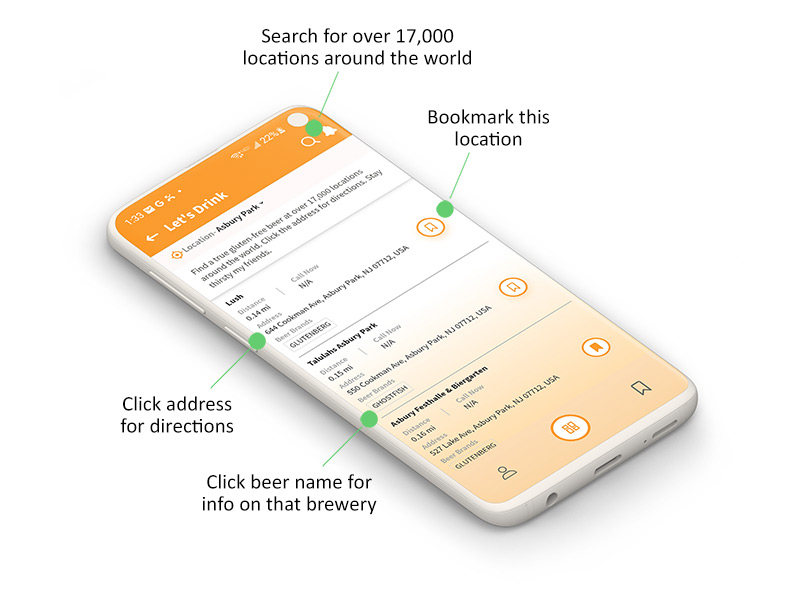 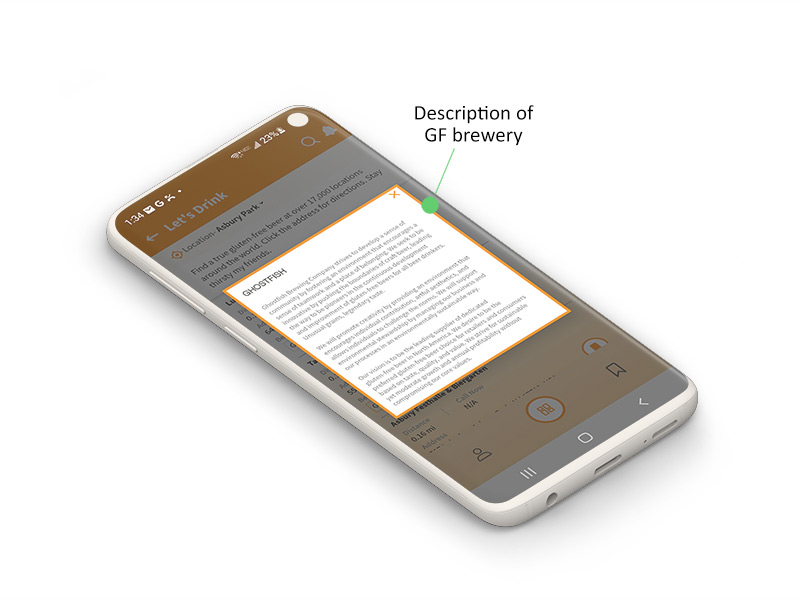 And now for the really important question...

Where can I find gluten-free beer?

“Beer is proof that God loves us and wants us to be happy.”Benjamin Franklin

Ah...another fine question. Because let's be honest, as much as we love gluten-free beer, tons of places still do not carry any (but gladly carry gluten-removed beer!) This frustration led to me including this feature on the Gluten Dude app. See those screenshots above? That is my app and there are over 17,000 stores, bars and restaurants on the app that carry gluten-free beer. I've been to every one of these places. Just kidding. The beer companies send me their locations every 3 months and I add them to the app.

So download the Gluten Dude app below and as god as my witness, you'll never go thirsty again! Cheers my friends.