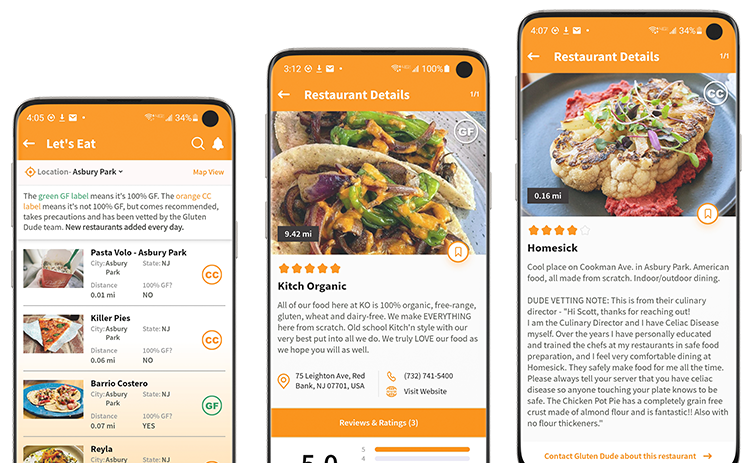 I was diagnosed with celiac disease in 2008 and I not only was I pretty dang sick, I was also terrified. Of what? Well...a lot of things that came along with this strange new disease, but I was really scared of eating out again. This was at a time where I had never even heard the word 'gluten' until my diagnosis and the majority of folks out there had not either...especially in the restaurant industry. Would I ever find a celiac safe restaurant??

After a few months of healing and calming my nerves, Mrs. Dude and I took one of our Dudettes to PF Chang's. While they weren't a 100% gluten-free restaurant, they were one of the first restaurants to "get it" and not only had a gluten-free menu, but had precautions in place to minimize the risk of cross-contamination as well.

I still have vivid memories of that first evening out…

I remember waiting for a table, very anxious about the ordeal. And my little Dudette put her hand on my knee and said “It’s ok Daddy. At least you don’t have cancer.” Little did she know at the time. Mrs. Dude and I had to contain ourselves from breaking out in ironic laughter.

I remember ordering and giving my big celiac speech for the first time. I remember having my first, and last, Red Bridge beer. I remember really enjoying the food, my family and the atmosphere and feeling almost normal.

And I remember thanking the waitress profusely when the meal was over, telling her it was my first time out since my diagnosis and actually tearing up as I was talking to her. To me, it was an emotional experience. She probably thought I was nuts.

Fast-forward 13 years and while celiac disease became easier to manage, finding a gluten-free restaurant, or at least a restaurant that could keep me as safe as possible, was still an incredible challenge. And that is why I created the Gluten Dude app; to make it easier and much less stressful for people in the gluten-free community to find a place to enjoy a meal.

Before I proceed, below are some screenshots from the app showing the restaurant listings. 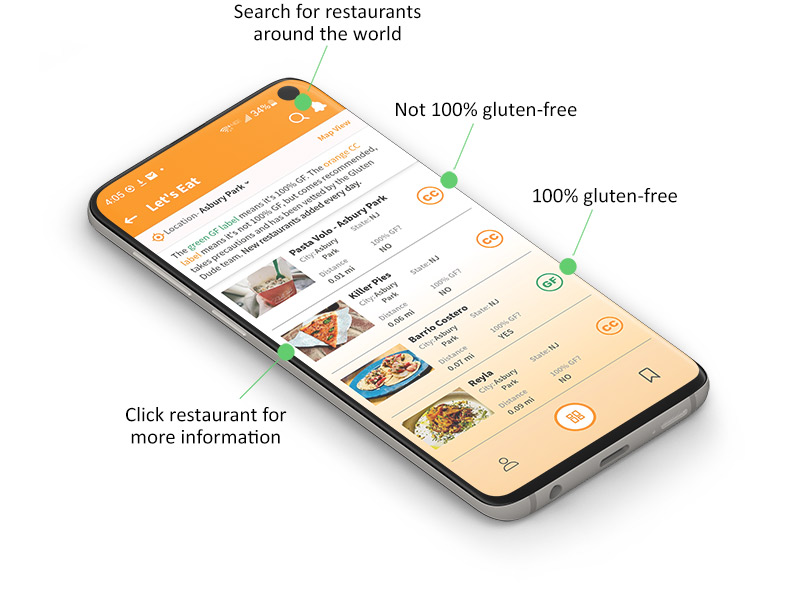 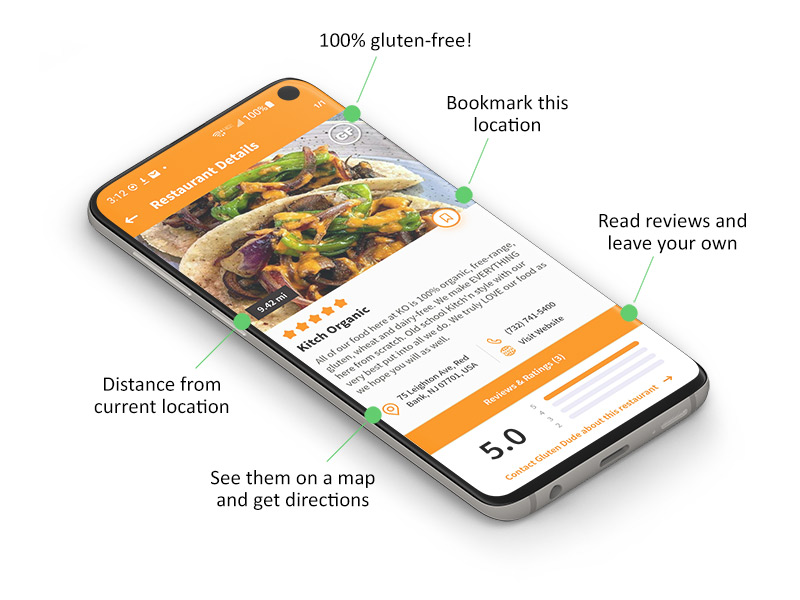 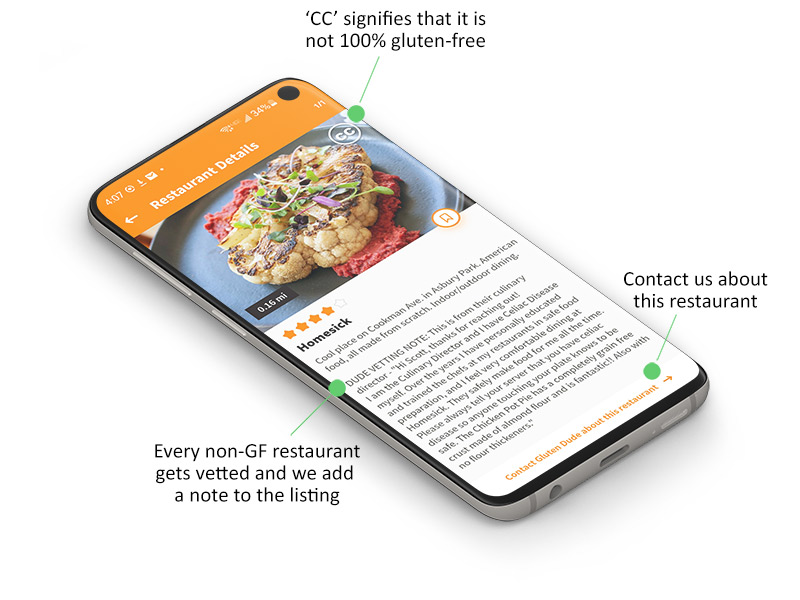 In order for the app to truly help the celiac and gluten-free communities, I knew it had to be more thorough and stringent than the Find Me Gluten Free app. I felt very strongly that fast food joints and large chain restaurants don't have the tools to minimize cross-contamination on a consistent basis. So I knew they would not be on the app.

First, using every resource at my fingertips, I tried to find every single 100% gluten free restaurant in the world. And then for each one, I made sure I had a description of the restaurant, a nice image, the phone number, address, etc.

Mission accomplished but I wanted to do more. I knew that there were tons of people out there with celiac disease who still ate out at regular restaurants. What could I do to help these folks?

After some sleepless nights and a few tequilas, I figured it out. I would also include non-GF restaurants on the app but I would be much more strict than FMGF in which restaurants get included.

Here is how non-gluten free restaurants get added to the app:

There are currently over 5,000 restaurants (as of December 2022) on the Gluten Dude app but since we constantly receive suggested restaurants and vet/add every day, you can be sure that number will continue to increase. So if you check out the app and don't see any restaurants in your area yet, feel free to suggest some to me on the app and we'll be sure to vet. The more suggestions we receive, the more the app will help the community.

To learn all of the benefits of the app, just check out the home page. In the meantime, if you are looking for a gluten free restaurant or a non-GF restaurant that will do their best to keep you safe, download the app below. Happy dining!

Do I really need your app if I already have the Find Me Gluten Free app?

First and foremost, Find Me Gluten Free is only a restaurant directory. The Gluten Dude app is a more stringent restaurant directory, plus a whole lot more. It's a money saver (Let's Save). It's an airport directory (Let's Fly). It's a gluten-free beer finder (Let's Drink). It's a support system (Let's Support). Heck...it's even a dating app (Let's Connect). It's everything you need to live a much better gluten-free life.